How to Make Healthy New Year’s Resolutions – And Keep Them

The holidays are coming and the year-end is fast approaching. It’s around this time that some of us start to reflect on the year past, and set goals for the months ahead. Those reflections often give birth to New Year’s resolutions – personal pledges that next year you’ll be happier, fit, productive, informed, and a better all-around person. 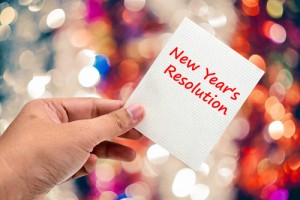 But bad news: according to a study from the University of Scranton, 45% of Americans make New Year’s Resolutions, but only 8% of people accomplish them.

We’ve come up with a list of five tips to transform your resolutions into realities – and tell you why it’s not the end of the world if don’t achieve them.

It’s easy to get overwhelmed by a big picture resolution. You know the ones: run a marathon, lose 30 pounds, become a better employee…

Nested within each of those bigger goals are several smaller steps that have to be taken.

By deconstructing your New Year’s resolutions into several steps, your goals will become more achievable from Day One, which will lead to a greater chance of success in the long run.

Tip Two: Be Realistic With What Is Possible

Aiming for the stars can be great, but is it realistic? When making your resolutions, take a good hard look at what is possible for you — physically, emotionally, and time-wise.

One of the main reasons people don’t accomplish their resolutions is because they just don’t have the time. If your resolution is to learn Spanish, but the effort required to do so would mean you couldn’t bring your kids to swimming lessons, you may need to reassess your goal. There is no time like the New Year to be frank with yourself, and while it’s important to be optimistic in your goal setting, it’s also important that you have the capacity to achieve them.

As psychologist Lynn Bufka tells the American Psychological Association: “it is not the extent of the change that matters, but rather the act of recognizing that lifestyle change is important and working toward it, one step at a time.”

New Year’s resolutions are supposed to get you through the next 12 months, but how does that translate to your everyday behavior? It’s easy to say you’ll accomplish Item XX within the first two months of the New Year, but you need an action plan to get there.

The University of Scranton study referenced earlier says 75% of people keep their resolutions for the first week of the New Year, but that number plunges to less than 50% following the six-month-mark. Don’t let that be you – set out weekly timelines to achieve your resolution and stick to them.

Whether it’s friends, family, or a significant other, resolutions are better accomplished if you are working on them as a team. The power of a community (not to mention a bit of social pressure) can be an excellent motivator. Joining a class or making a date to prepare healthy meals with a friend every week can help you commit to your resolution.

Virtual sharing can work, too. Announcing your goals on Facebook and Twitter, or documenting your accomplishments on a public blog can be a good accountability tool, not to mention a source of support when you need it.

This is a tip for after you’ve made your list of resolutions — and perhaps broken one or two of them. Remember that just because you didn’t reach the goal you set out to achieve doesn’t mean you haven’t learned anything.

Resolutions are about more than just the final outcome. Maybe you didn’t lose 20 pounds but as a result of your attempts you learned to cook various healthy dishes. Perhaps you didn’t completely pay off your debt but in trying you discovered an effective budgeting app for your phone. Stop fixating on the outcome of your resolution and think of all that can be learned along the road to that goal.

What’s a time you’ve made a New Year’s resolution and kept it? Share your tips in the comment section below.

This entry was posted in News and tagged Resolutions. Bookmark the permalink.